Every year, the Chief Justice of the Florida Supreme Court and the President of the Florida Bar convene in Tallahassee to recognize lawyers who have made substantial pro bono contributions.  One of the awards, created by the President of the Florida Bar, is given to one member from each judicial circuit that has provided exceptional and special services for the poor.  This year, Chief Justice Ricky Polston and Florida Bar President Eugene K. Pettis will present the pro bono awards in Tallahassee, on January 30, 2014, at 3:30 p.m., and FJA members, Virginia M. Buchanan and David L. Rodziewicz, will be recognized for their service.

The Florida Bar President’s Pro Bono Service Awards were established in 1981. They are intended to encourage lawyers to volunteer free legal services to the poor by recognizing those who make public service commitments and to raise public awareness of the substantial volunteer services provided by Florida lawyers to those who cannot afford legal fees. The awards recognize pro bono service in the 20 judicial circuits and one Bar member practicing outside Florida. They are presented annually in conjunction with the Tobias Simon Pro Bono Service Award.

Virginia Buchanan, Levin, Papantonio, Thomas, Mitchell, Rafferty & Proctor, P.A., Pensacola, was nominated by the Director of Northwest Florida Legal Services (NWFLS), which meant such a great deal to her, since NWFLS and its employees’ mission is to provide quality legal representation to the underprivileged. “I was honored to have worked with NWFLS in its free clinic and in court to assist clients with serious legal needs. Those clients had a clear inability to pay for representation. I have been blessed to work for an excellent firm and outstanding clients; and part of the obligation I have as an attorney is to use the skills and commitment I have to the law to serve the underserved and needy. Levin Papantonio encourages that service among its lawyers. Injustice happens all the time, and we cannot always prevent it, but we can do what we can to reduce it. By helping those who otherwise would be unaided, who would simply have to live with and accept an injustice, we are making a difference – one client at a time.   This award means a lot to me, not that I needed or expected any recognition for the service to the poor that I am able to provide, but it means a lot because it provides the opportunity to re-realize what a privilege it is to be a lawyer and be able to contribute something positive,” said Virginia. 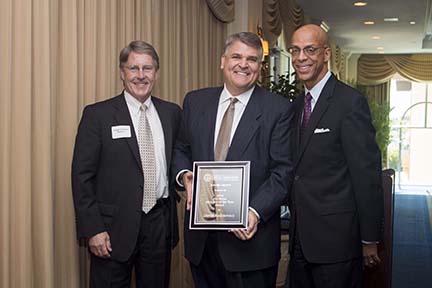 David Rodziewicz, Rodziewicz Law, P.L., Ormond Beach, is also honored to be receiving the Bar Presidents award for Seventh Circuit Pro Bono Attorney of the Year, especially after having been recognized as the Community Legal Service of Mid Florida's 2013 Pro Bono Attorney of the Year. See photo: Dave (center) after the award ceremony with Seventh Circuit Chief Judge Terence Perkins (left) and Florida Bar President Eugene Pettis (right). "In five words or less,” he said, “Pro Bono Facilitates Justice Locally.” For David giving back to his community is a core value with which he was raised, and that value was reinforced in his education by the Jesuits, and remains fundamental for him today. “A half hour of my time could improve the trajectory of someone’s life. Who wouldn’t want to do that?" asked David.

Virginia and David are great representatives of the FJA and reinforce our mission of strengthening and upholding Florida's civil justice system, and we are very proud of the work they both do. Learn more about Virginia Buchanan and David Rodziewicz.