(Spotlight adopted from Steve Charpentier's Speech at the Appreciation Ceremony) 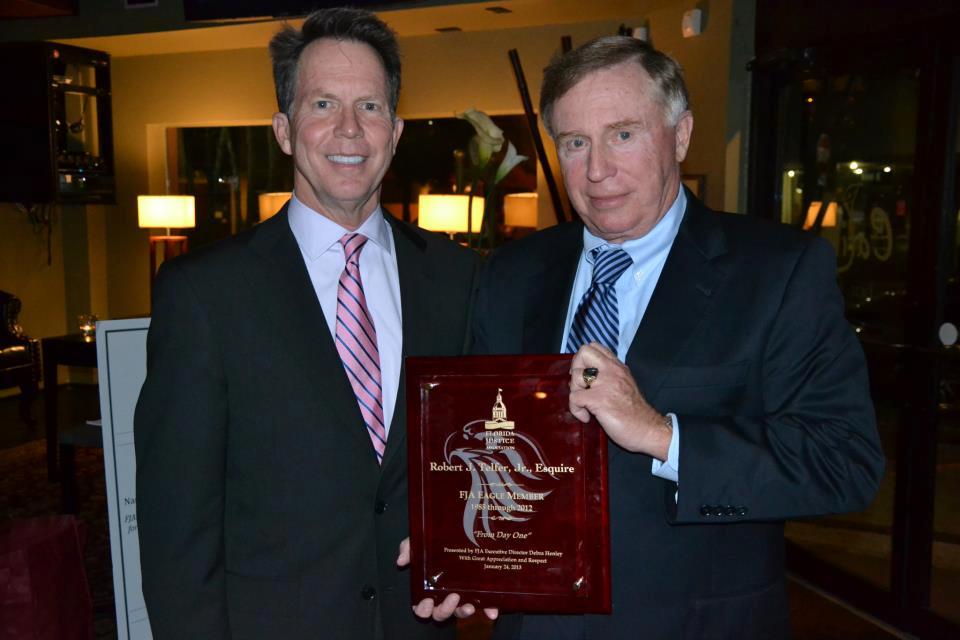 Bob Telfer joined The Florida Bar in 1971 and shortly thereafter, in 1978, joined the Florida Justice Association, and has been a member ever since. Bob’s first position serving as an attorney in Florida was as Assistant County Solicitor, then Assistant Public Defender, and Assistant State Attorney. It was at the State Attorney’s Office where Bob met Lou Cianfrogna who became his best friend and literally a business partner and law partner for life.

About Bob and Lou

The two came up with a plan to go into practice together and at the time Bob was married and had a family, Lou wasn’t. So it was decided that Bob would take a job with an insurance defense firm in Orlando so he could pay the bills at home and have some benefits. It was Lou’s job to start the private office in Titusville. Well, the two went to work on their plan and after a short while Bob joined Lou and the two were working together in Titusville. They decided that they needed a plan for Bob to get better known in town - as you know Lou never had much trouble getting known wherever he was - so it was decided that Bob would run against the current “unbeatable” Mayor of Titusville.

The simple plan was to get out there and campaign, get known in the community, say about whatever you needed to say, but realizing that the incumbent was unbeatable, lose the election. Well - after defeating the then current and previously unbeatable Mayor of Titusville - Bob became the Mayor of Titusville.  Despite that setback Bob and Lou built one of the largest most prestigious plaintiff’s firms in Brevard County and it continued for years.

Some facts to demonstrate the integrity and veracity of that firm are the following:

Three of our current Judges practiced in Bob’s firm.

A current Port Authority Commissioner practiced in that firm.

That firm continues today in name, spirit, and integrity despite Bob’s retirement.

Bob and the FJA

Bob joined the Florida Justice Association, then known as the Academy of Florida Trial Lawyers, on February 15th, 1978. He has pledged to the EAGLE Program from 1985 to 2012 AND NEVER MISSED A PAYMENT. Bob served on the Board of Directors for the Academy of Florida Trial Lawyers from 1990 to 1992. Bob served on the Brevard County FLAG Task Force from 1999 to 2010. He has always been there and I’m sure always will be and that is why this award is appropriate. If you read the faceplate on the award it says, FJA EAGLE Member 1985 through 2012 “from day one”. That’s perfect for Bob.

He has always been a consistent supporter of legal rights for victims and for consumers, from the days of fighting Amendment 10, to lobbying in Tallahassee and to simply getting the vote out on the important issues to those in the public that we serve.

From my perspective, Bob is a great lawyer who has the additional attribute of always being able to find the time to share his knowledge, his insight and his wisdom with others and at the same time share his passion for the virtues of the Constitution and Consumer Rights - day after day after day.

In fact, Bob was named by his peers as one of America’s Super Lawyers in 2011.

“From Day One Brother - and with God’s grace we haven’t reached the end.”