< Return to Articles of Interest Page

“The wise Sir Bedemir was the first to join King Arthur's Knights, but other illustrious names were soon to follow: Sir Lancelot the Brave; Sir Galahad the Pure; and Sir Robin the Not-quite-so-brave-as-Sir-Lancelot who had nearly fought the Dragon of Agnor, who had nearly stood up to the vicious Chicken of Bristol and who had personally wet himself at the Battle of Badon Hill; and the aptly named Sir Not-appearing-in-this-film.”
– Monty Python and the Holy Grail

If it were up to Todd Copeland, the tale of his ascendancy to the Presidency of the Florida Justice Association would feature him as “Sir not-appearing-in-this-Journal.” Much like the fictional Monty Python heroes' tale, Todd Copeland is not one to seek the spotlight. But so too, as the Knights of old, Todd is described by his family, friends, and peers as fierce in battle, compassionate and honorable in victory and defeat, and giving true service to a cause greater than himself.

But before he became the incoming FJA President, there was a kid whose life seemed destined – and may still be – to be lived outdoors.

Todd Copeland entered this world in 1966, complete with the hair that would win him “Boy With the Best Hair” in 8th grade. He grew up a Cincinnati Reds fan in Indianapolis, Indiana.

An only child until age seven, he hoped, prayed and wished for a brother. When he was seven, he got a sister. According to Todd's mom, Pat Dunbar, after being told he had a new little sister, Nicole, he confessed to his Nana that: “Oh, I was hoping for a boy.”

Despite his “disappointment,” Todd instantly adored his little sister and the two became inseparable. According to Nicole, “Todd is definitely the protector of the family. If you need someone to be there for you, it is going to be him.” It was a family of three – Todd, Nicole, and Mom – until Todd was ten years old. It was then that Todd's mom married Dick Dunbar and Todd got the brothers he had hoped for – Kelly, Patrick, and Dean.

Nicole said, and Todd heartily agreed, that, “Her parents did a wonderful job of blending their families and they do not think of their brothers as step brothers. They were all very close.”

In describing her boy as a youngster (and today), Todd's mom bestows on him the phrase moms have used since time immemorial to convey love, appreciation, nostalgia and pride. “He was really a good boy” she said.

Like most young boys, Todd loved sports. He watched, played and dreamed baseball. Even today he can rattle off the starting lineup of the Cincinnati Reds for any given year.

One thing he didn't dream about, however, was dancing, clothes, and etiquette. When one thinks “cotillion” one does not necessarily think Todd Copeland. But cotillion he did.

Todd learned manners, etiquette and how to dance and ask girls to dance with him in Mrs. Kinnear’s Cotillion. He wore shirts, pants and suits and learned all the proper dances. They learned how to go get the girls punch and cookies. Not surprisingly, Todd frequently complained and said he would much rather be playing baseball.

After high school, Todd decided on Eckerd College and was ready to start studying and playing baseball. But when he got to Florida, he realized that Major League Baseball was probably not in the cards and he began to focus solely on his studies.

After his second year of college at Eckerd, Todd decided Law School was his future.

But before we could get to know Todd the lawyer, we had to meet Todd the Bailiff.

It was a dark Indiana summer night. In the distance, the low rumble of a Midwest thunderstorm bore down on the open field. The bright flash of lightning occasionally pierced the darkness. Across the field a young Todd Copeland spots the shadow of two escaped juvenile convicts. He takes off running. Heart pounding, Todd Copeland, Bailiff, is on a mission and won't be stopped. Sweating. Dirty. Tired. Todd Copeland and his partner are victorious. Convicts caught. Justice served.

At least that's how we all imagine it taking place. In reality, while in college, Todd worked for Judge James Payne, a family friend, who also happened to be the head of the Juvenile Court. While working for Judge Payne as a Bailiff of sorts, a boy who was before the judge took off running and Todd felt so compelled to handle the situation and do his job well that he took off running after the kid and brought him back.

Unlike the movie “The Fugitive” there was no drainage pipe showdown or dramatic reveal. In fact, the judge told Todd never to do that again and to just let them run.

But Todd got a taste of the law and of the lawyers involved. Describing some as “characters” Todd knew he had found his calling. 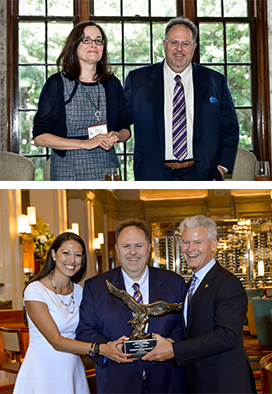 After law school, Todd explored options and took an offer in Orlando, Florida and never looked back. Today, Todd is the Founder and Managing Partner of Todd E. Copeland & Associates, P.A.

He credits former FJA President, Jim Kelaher for introducing him to the organization and, in Todd's words, “making him feel welcome.” Todd went on serve as the FJA Secretary, Treasurer, and Auto Committee Chairman. While Jim made Todd feel welcome, in true “Sir not-appearing-in-this-Journal” fashion, Todd did his best to do service but remain quiet. However, fate – and his colleagues – intervened to the point where Todd was even reappointed to the Executive Board in absentia.

And it remains those same colleagues and friends who best describe our incoming President.

The Tale of Todd Told by Others

Todd's friends and colleagues are truly effusive in their praise for him – both as a incoming leader and as a human being.

Words used to describe Todd include “persistent,” “underestimated,” “benevolent,” “incorrigible” and of course, “midwestern.” FJA Legislative Director, Jeff Porter, even had to make up a word to describe Todd. That word - Indepidual (it's a combination of independent and individual).

When asked why he will make a good FJA President, friends and colleagues didn't hesitate. “Because he is smart, driven, and listens,” said FJA Treasurer Jimmy Gustafson. “He is thoughtful and can balance the rest of us,” was FJA Secretary Dale Swope's take.

Perhaps the most effusive praise came from the least likely of voices. Described by his own mother as “something of a character,” Todd Copeland and FJA Political Affairs Director, Kevin Sweeny, frequently trade barbs and jokes at the expense of one another. Yet when asked to describe Todd, Sweeny never flinched. He said of his verbal sparring partner, “While he portrays a tough, rough exterior he manifests a keen desire to get the job done when it impacts people/animals/issues he cares about. He reminds me in many ways of Eric Fleming's portrayal of Gil Favor in 'Rawhide,' always quietly compassionate and savvy, yet sometimes unseen, but always scheming something somewhere.”
It is that passion mixed with playfulness. That belief sprinkled with realism that makes Todd Copeland one of us. FJA Executive Director, Debra Henley said it best when talking about Todd when she said he, “Reflects the type of lawyer and firm that comprises our membership, he is in tune with the needs and challenges of the small firm.”

Empathy, compassion, character and thoughtfulness. All words to describe Todd today and words that may very well guide his future inside – and outside – of the law.

There is no doubt, after talking to Todd Copeland, that his focus this year will be on protecting access to courts and continuing to grow the FJA both in membership and mission. That is the task of any President and one that Todd relishes the opportunity to achieve. He knows that 2015 – 2016 will see desperate gasps of many special interests' attempts to restrict plaintiff's rights and do permanent damage to many practices and victims throughout the State.

But few doubt Todd's ability to have a “Rafferty-esque” 2016 Legislative Session. For, as Jeff Porter put it, “He's been doing this for years. Great relationships. Political and legislative know-how. Great hair. Gucci loafers.”

What more could the FJA ask for?

That's for the next year. After that, who knows. If Todd had his wishes he'd move west to an open space, plant a vineyard, have a slew of dogs around and enjoy the outdoors as he always dreamed.

But that's no secret. The consensus among colleagues is that they'll one day see him running a “No Kill” animal shelter, operating a vineyard, or as a Sports General Manager. Those Todd's are for another day however.

Today, and for us, he has a part to play, and he is eager to take the stage. While he may have wished to be “Sir not-appearing-in-this-Journal,” there is no doubt that he will end up being Sir Todd the Not-quite-so-thin-as-Sir-Rafferty who will ferociously fight the Dragon of the Chamber, who will stand up to the vicious Red Herring of Malpractice and who will personally distinguish himself at the Battle of 2016.